This month Pragmatic Play released their new Street Racer slot. With a high variance, this slot is not for the faint-hearted. Admittedly the R.T.P is an above-average 96.52%, so over the long term, the casino only has a 3.48% edge. However, the high variance does mean long periods of nil or small returns.
However, we just couldn’t resist the chance to hit big wins. We decided to give it a go.

We headed over to take a look at the paytable. The symbols are attractively designed and pay when 3 or more are landed consecutively, left to right, starting on the leftmost reel.

The game has 4 low paying symbols, but rather than the typical A, K, Q, J; Street Racer has colorful card suits spades, clubs, hearts and diamonds. There are 5 higher paying symbols and these are the race drivers. The highest paying is Vapor – landing 5 of these symbols wins 200.

The racing-themed wild card is a stopwatch and the free spins symbol a pair of checkered flags.

So off we went to the starting grid and hit the spin button. The first 10 minutes were very uninspiring! Yes, this is a high volatility slot! However, our tactic had been to start with a small bet. Reasoning that our chances of winning a decent prize were increasing after every losing spin we decided to increase our stake. We were well rewarded soon after.

Street Racer has a great free spins feature. To trigger this 3 scatter symbols are needed, and this we did. Now we had to choose our driver and thus the number of free spins and volatility probability.

The highest volatility level driver is Vapor. With Vapor, you get 8 free spins but the potential winnings are greater than with the other, lower volatility drivers. We could have chosen one of these drivers, such as Firefly (the lowest), and had more free spins, but the possible winning are less.

In for a penny, in for a pound, as the saying goes – we opted for Vapor with 8 free spins and the chance to win big. 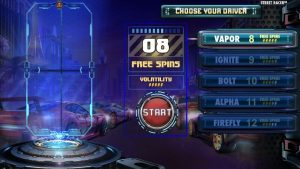 The Free Spins feature is a maximum 5 lap race. An extra empty symbol column appeared on the left of the reels. Collecting 3 Nitro symbols in this column, we progressed to the next lap and were then rewarded with extra free spins.

We had one heck of a ride! In total, during this single bonus play, we landed 13 high volatility Free Spins over 3 laps and won €15,950.

Play the new Street Racer Slot at Casumo and claim your bonus!