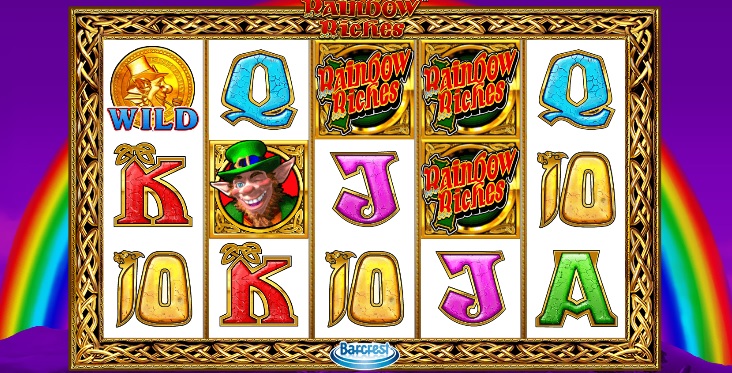 This week we’ve reviewed the newest slot game Pyramid King, launched only a few weeks ago, and now here’s a look at an older, and very popular slot, Rainbow Riches, which time-wise is at the other end of the scale, having been around since 2009.

Irish folklore tells of a pot of gold at the end of the rainbow. Spoiler Alert: a rainbow is a trick of the light and there is no end to a rainbow. Sorry about that, but you have to know the truth.. now, let’s discuss Father Christmas; or perhaps we’ll save that for a future blog post. One severe disappointment at a time is enough to cope with – Ed.

Now for the good news, the Rainbow Riches slot game DOES have a pot of gold at the end of the rainbow – and that pot of gold can be as much as 250,000 coins.

The slot is classified as medium variance, yet there is still the possibility of big wins.

The symbols A, K, Q, J & 10 have pretty respectable payouts, particularly when landing five of them. The Wild is a gold coin and this is wild for the aforementioned symbols.

We really like the three bonus games with this slot. 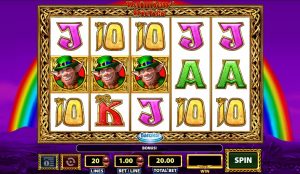 The Road To Riches bonus game is triggered when 3 leprechauns scatter symbols are landed. We have to say the leprechaun is quite an ugly little fella. During the course of our demo play, we landed this bonus feature several times. Spinning the wheel of fortune on one of these occasions took us up the path to the x30 bet multiplier.

The Pots of Gold scatter symbols can appear only on the middle three reels. Landing three of these symbols trigger the Pots Of Gold bonus feature which involves the opportunity to multiply your stake according to which pot is chosen.

The only downside as far as we’re concerned is there is no Free Spins feature. That said, Rainbow Riches is a fun game to play, and there’s always the possibility of landing the 250,000 pot of gold at the end of the rainbow.

Play Rainbow Riches at Casumo and claim your bonus!