You’ve come to the right place if you’re looking for Pyramid King free spins. Here is a great way to try out the many slot games available online – play them for free here at Casinobonusspins.com! Understand the game’s rules before playing for money. There is no need to register! Play free for as often and as long as you want. Work out your strategy. When, or if, you want to play for real money then check out one of the great offers we’ve sourced. You will find these right next to the game you’re playing. 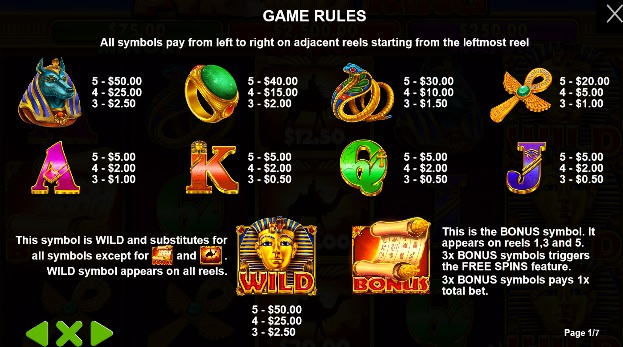 All symbols pay from left to right on adjacent reels starting from the leftmost reel.
The regular symbols J to Ace pay 0.50 to 5.00. The game special theme symbols pay 1.00 to 50.00

The Pharoah golden death mask is Wild and substitutes for all symbols except for the Bonus Scroll symbol and the Camel Sunset Money symbol. The Wild symbol appears on all reels.
The Scroll Bonus symbol appears on reels 1, 3 and 5. Three of these will trigger the Free Spins feature. 3x Bonus symbols pay 1x the total bet.

The player starts with 3 Re-Spins. All MONEY symbols that are landed after each re-spin remain on the machine until the end of the round. Every time at least 1 MONEY symbol is hit, the number of re-spins is reset to 3.
The round continues until re-spins are finished or all the positions on the machine are filled with MONEY symbols.

When the MONEY re-spin feature is complete, the values of all the symbols are added and the game pays out the total amount. If ALL 15 positions are filled, the player also wins the GRAND JACKPOT. The Money Re-Spin feature is available during the Free Spins round.

In the Pyramid King FREE SPINS feature, 10 Free Spins are awarded. Before the round starts, a special expanding symbol is selected randomly, from all symbols except Bonus. During the Free Spins, after the payout of regular symbols, the special symbol expands vertically to cover all 3 positions on the reel.
The special expanding symbol pays according to its paytable, on all reels, even on non-adjacent positions. Expansion is triggered only if enough symbols for a win are present.
If the special expanding symbol is the MONEY symbol, after expansion a MONEY RE-SPIN feature is triggered.
Hitting 3 or more symbols during the Free Spins round awards 10 more free spins with the currently selected special symbol. There is no limit to the number of possible re-triggers.